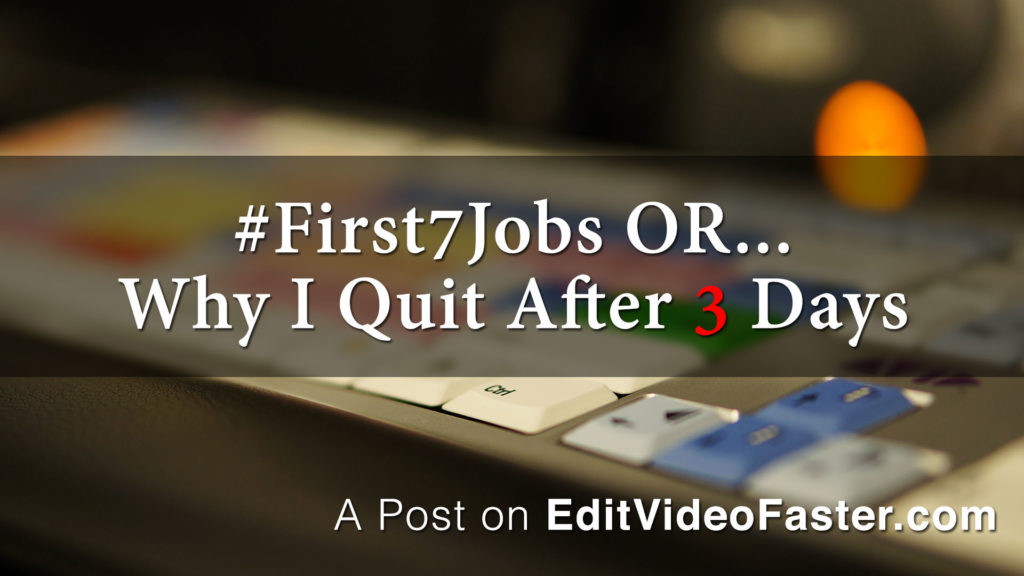 Today it’s seemed like everyone has tweeted their #first7jobs. I of course joined the party.

I was a sophomore in college. It was fall semester and I was looking for a part-time gig. There was a new CD store opening up at the local mall so I went in to apply. Fast forward a day or two and I got a call asking to come in for my first day. I didn’t even get interviewed which I found very odd…

My first two days were okay. The store wasn’t open yet. I spent the eight-hour shifts stocking shelves and organizing CDs, cassette tapes and DVDs. It was boring and the coworkers were not fun. This was a stark difference from any other job I had ever had.

Over the summer I had spent it working construction with my best friend and my dad each weekday then each weeknight and all weekend my best friend and I went and worked at the same restaurant. I had the time of my life. Somehow I also started dating my wife that summer while I was working 80-90hour weeks. Oh to have the energy of a teenager again…

Okay, back to the CD store. I was bored out of my mind. I was getting paid minimum wage. But I have a strong work ethic and had never quit anything before. I was determined to stick it out for the semester.

The store opens and I have my third day of work. I get trained on the computer to check out customers for maybe 10 minutes. I go through my shift and it wasn’t that bad. I was feeling more optimistic. Talking to customers was something I enjoyed since the coworkers weren’t much for company. Then I turned in my register and I went through the paperwork with the manager. What he told me next floored me.

After looking through my numbers, which all checked out, he told me one of my metrics was poor. The metric was amount of items sold per customer. I needed it to be higher. Why? So this store could hit their own numbers so probably the managers could get a bonus. And his solution??

He walked over to the front of the cash register. There was a “CD opener” (it’s like this piece of plastic with a tiny blade). He told me that whenever an older woman is checking out that I need to push them to buy one of these in order to make my numbers. This wasn’t like a pep talk requesting me to get my numbers up. This was a 40-year-old man angrily requesting me to target little old ladies to get them to spend an extra $1.50 on something they didn’t need in order for him to make more money.

I nodded but internally I was feverously shaking my head. That weekend I had went back home for some reason. I told my dad what happened and that morally this was wrong (because it was a POS product being used to target an audience that I respect). And I asked if he’d be disappointed if I quit. He didn’t raise me to be a quitter.

What he told me next I’ve carried with me through every professional venture I’ve done. He told me that if a job makes you question your morals than it isn’t for you. And that it’s not quitting if it’s the right thing to do.

So once I got back to school I said sayonara to the CD store and didn’t look back.

Three days and I knew this wasn’t for me. In your professional life you should never be put in a situation that makes you question your morals. If this is the case think on it. It’s not quitting if it’s the right thing to do.