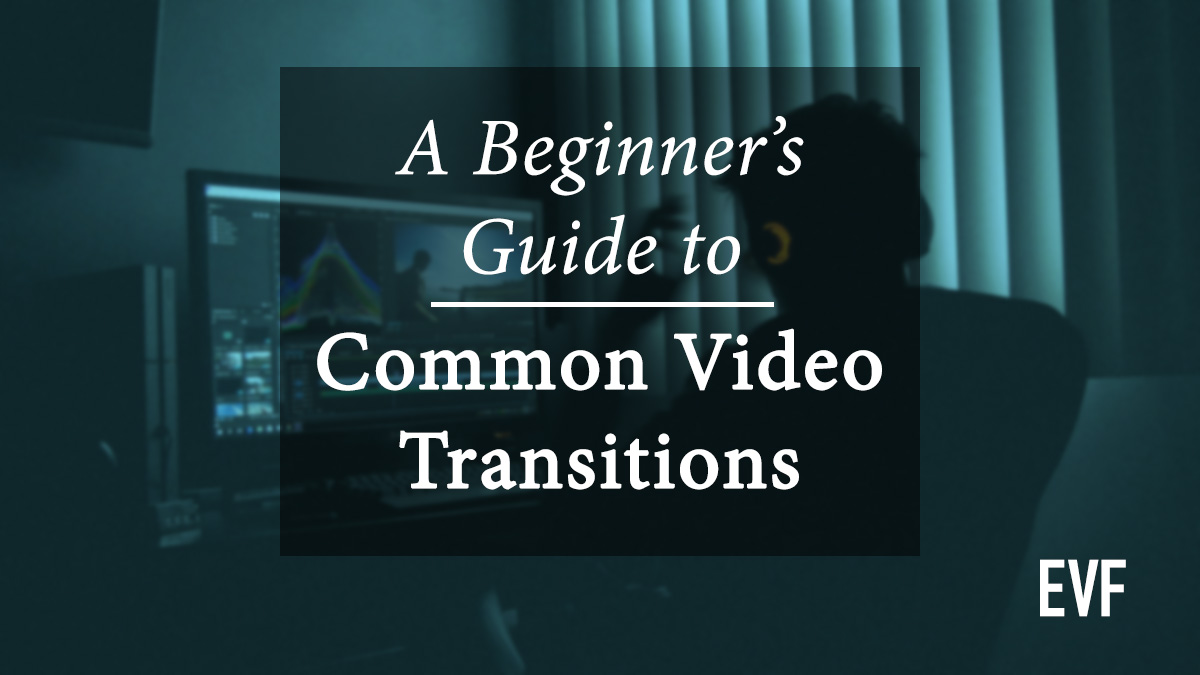 This guide will explain the common video transitions for video editing. Learn what cut, dissolve, fade, dip, and other transitions mean and when to use them.

This is not by any means an exhaustive resource on video transitions. This is a high-level overview designed for the brand new video editor.

Maybe you recently started (or want to start) a YouTube Channel. Maybe your boss asked you to make a video for a presentation and you’ve never edited before and are lost in a maze of tutorials. Or maybe you’ve decided you want to become a video editor and are just getting started on your journey. This article is for you.

At the end of the article you can grab a free PDF download guide of this information on common video transitions. It is condensed down even further for easy consumption when you’re editing.

In case you’re new to Edit Video Faster, I’m Josh. I do most things around here. I’ve been a professional editor for more than a decade (phew, I’m getting old) and have been teaching what I know about video editing on the Internet since 2014. If you learn something from this article and want to stay-in-touch, please sign up for my email list. I typically email ~twice a month and never spam you with unnecessary stuff. Just tips and resources for becoming a better, faster, and more confident video editor.

Alright, let’s get into it.

What are Video Transitions?

The point in time in your video when one shot changes to another shot is a video transition. It can go from one shot right to the next one (a cut) which is one frame long. Or it can be longer, let’s say a second, and can mix and blend with the following shot with the previous shot over that period until the following shot is displayed (a dissolve).

A transition can also be from or to “black” to a shot. Black means nothing or no shot which is shown as “black” ◼️ on screen.

Video editing software, commonly called NLEs (non-linear editors), have most of the transitions discussed in this article already built into them as presets. For these presets you can adjust the timing of them and some other properties depending on the transitions. For example, for a wipe you can typically change the angle or feathering of it.

Each video editing software works differently for how to apply and adjust these transitions. Please defer to articles and tutorials for each individual NLE for learning how to do these. But feel free to leave questions in the comments if you’d like and me and the rest of this awesome community can try to help.

Side note: You may also want to check out my guide on common video terms. You can get that here.

A cut is when one shot goes right to the next one. One shot ends and on the next frame the next shot begins. The cut is the most typical transition. It can never be over-used in a video.

You can use editing techniques like adjusting the pacing (the amount of time a shot is shown) to make cuts more effective. For example, a section of your video can be fast-paced and each shot is shown for a half second and you cut, cut, cut, between each shot. That’ll give a much different feel than if you had each shot on for three seconds and cut between each one.

When in doubt, just cut between shots.

You also want to be weary of jump cuts. This is when the cut is of two shots that look closely like each other and it throws the viewer off. For example cutting from a medium shot (MS) of a person to another medium shot of the same person. That might look funky. In this case, find a different shot to cut to like a close-up (CU).

A dissolve is when two shots are changed by blending them over a (usually) brief period of time. For example Shot A and Shot B are blended together for 1 second @ 30fps (Frames Per Second). The first frame of the dissolve you can’t really see Shot B. As the dissolve continues you see Shot B more and more and Shot A less and less. At frame 15 of the 30 frames in the transition, you see both shots equally. When you get to frame 30 you see Shot B and none of Shot A.

A dissolve is the most standard video transition after a cut. I don’t know of an NLE that doesn’t have the ability to create a dissolve with a couple keystrokes or mouse clicks.

The duration of a dissolve can convey meaning. A dissolve that’s like 4 seconds long gives a much more “longing” or “loving” or “sad” feeling than a dissolve that’s only a few frames long. Think about all those cheesy 80s soft rock music videos. Longggg dissolves = sappy (usually).

A dissolve is very good for showing a change in time or location for your video. Is it magically an hour later for your characters? Throw a dissolve between the shots to signify time has changed. The same goes with when you go from one scene to another scene that’s at a different location.

Using dissolves too often ruins their effectiveness though so be weary of just using dissolve after dissolve between your shots.

Reminder — grab the free PDF at the end of this article for a summary of all these transitions you can keep handy while you edit.

A fade is similar to a dissolve but is generally referred to as going from black to a shot (a fade in) or from a shot to black (a fade out).

Using our Shot A and Shot B scenario from the Dissolve section, imagine Shot A is “black” or essentially nothing. It shows as black on your monitor and on the video itself. Now dissolve Shot A with Shot B (an actual clip) and this is a fade on. This typically happens at the start of a video on the very first shot.

Now flip them. Shot A is an actual video clip and Shot B is black. Dissolve transition them and this is known as a fade out. A fade out typically occurs at the end of a video on the final shot.

A dip transition is when you go from a shot, dissolve to a color, then dissolve to another shot. The color is typically black or white but as the editor you can choose whatever color you’d darn well like.

Corporate editors like myself definitely overuse this one lol. They’re fantastic for promo and marketing material.

Make sure to play with the length of the dip transition. A 6-frame dip will feel different than a 2-second dip.

Imagine your hand going across your computer screen. There’s a shot on the screen and as your hand moves across the screen a new shot is shown. This is a wipe transition.

The wipe I just described is a horizontal wipe. There are other types of wipes though. Instead of going across, you could go up or down. This is a vertical wipe. Or it could go in a clock-type motion and this is called a clock wipe (duh). There are other wipes like venitian blind wipes or star wipes or page curl wipes. For the most part, these should be avoided as they typically come off as cringy. But if you can find a way to work them into your video in a meaningful, positive way — go for it!

The Star Wars movies use a ton of wipes if you’re looking for popular examples. They are excellent for showing a change in location.

A common adjustment you might make to a wipe transition is adjusting the feathering of it. Having a hard line moving across the screen as the new shot wipes on might not be best for all cases. Throw a small feather on it to create a “softer” transition.

Like the most of the other transitions described in this article, experiment with the duration of the wipe to get different viewing experiences for your audience.

A push transition is when one shot “pushes” the other off screen. These typically go left-to-right, right-to-left, top-to-bottom, or bottom-to-top. They can come from the corners or other angles but for the most part, left/right + up/down.

Push transitions can be useful if you want to put several shots on screen at once. Push them into place and then off screen.

Other Types of Video Transitions

There are other types of video transitions as well. Some are cool like Whip Pans and Light Leaks. But for the most part anything crazy you see like the page melting, glass-y looking transitions, explosions, etc. should be left out of your videos. Yes, they’re “fun” but outside of personal and/or making something deliberately “tacky” leave them alone. Your mileage may vary.

Below is how to access a free 1-page PDF guide on common video transitions. It contains a condensed version of what is discussed in the article above. My hope is that with this and my other guides you can start to build a handy library when you are sitting down to edit. Instead of sifting through bookmarks or your browsing history, you can make a folder on your desktop or somewhere with all these quick guides.

This guide is 100% free. If you’d like to support Edit Video Faster you can enter a price in the “Name a fair price” section. Otherwise type “0” (zero) then click “I want this!” to get the guide delivered to your inbox. If you want to buy your boy a happy hour beer in the event he ever makes it out of the house and back to his local dive bar again, I’d be super grateful and will add you to my Supporters Page (only if you’d like to be added!).

I truly hope you enjoy this Beginner’s Guide to Common Video Transitions. If you have thoughts, suggestions, ideas, etc. leave me a note in the comments!

1 thought on “A Beginner’s Guide to Common Video Transitions”