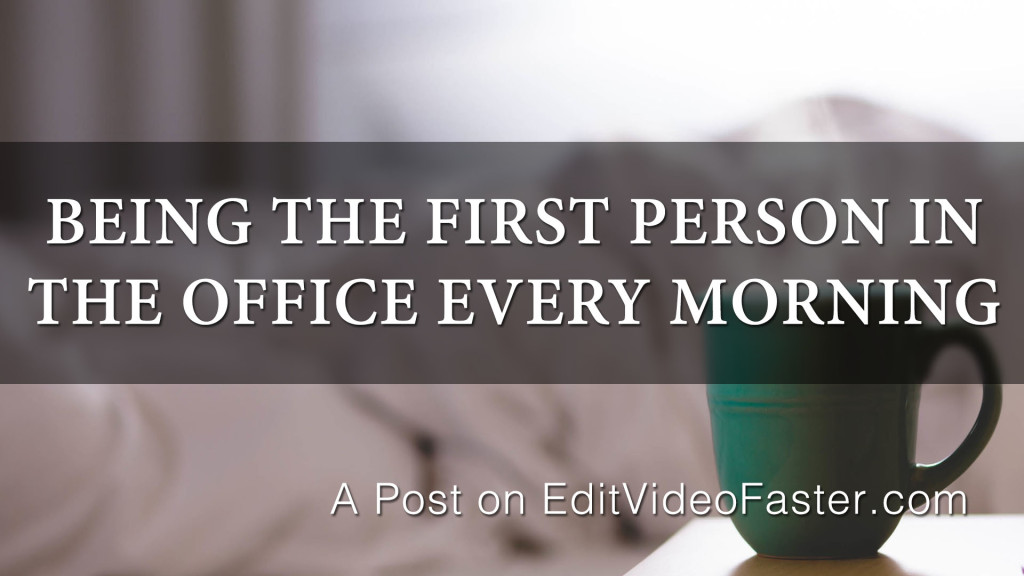 I’ve been the first person in the office my entire professional career. I don’t believe I am actually a morning person. I know I’m definitely not a night owl. But I somehow made myself into the person that is the first one in the office every single morning. I find it incredibly beneficial and want to share the reasons why with you.

I could write a post and title it, “6 Reasons Being the First One in the Office is the Best Career Move You’ll Ever Make” or something like that. It’d get way more clicks than “Being the First Person in the Office Every Morning.” However I want to provide you value from my experiences and not just regurgitate things you probably already know. In this post I’m going explain why I am the first one in the office and why I believe it’s beneficial.

My History of Early Rising

I feel like you should have a little backstory on my past work experience and times I arrive to work.

I interned on Capitol Hill. It was a brutal commute, especially for someone who had never really commuted before. I knew the boss, that’s how I got the internship, so he allowed me to “do the early shift” of 8:00am-4:00pm like he did. Me being a bit OCD about being early would get in between 7:30am and 7:45am. I quickly became a valuable team member because I took initiative and took over the coffee-making responsibilities. There was always a fresh pot ready when the rest of the crew walked in. It was noticed the handful of times DC Metro royally screwed up and I was late. Being the designated coffeemaker it’s not cool that people take notice when I’m late but it’s also positive that my noticeable contribution to the team was missed.

By the way, if you’re interning you better be at work 15-30 minutes early everyday. No exceptions.

Why Be the First Person In the Office? Pros and Cons

I get up at 5:15am give or take 15 minutes on either side. Why on earth would someone do this to himself or herself? Who does that by choice??

I like to get home by 5:00pm and have the whole evening to myself.

I like to walk Peyton in the daytime when I get home.

I like getting an absurd amount of work done in the morning before most people are even awake.

I like to be able to take a quick nap after work.

I like driving when no one else is on the road.

I like being known as the person who is the first one in every morning.

I like being able to turn the lights on in the office.

I enjoy watching the sunrise everyday for the past 5+ years and watching the world come alive. It’s an incredible feeling watching the sky change colors while crossing over a bridge that takes you to the most powerful city in the world.

Let’s be real though. As romantic as I can get it does suck a lot of the time.

It was rough trying to keep up social appearances with friends the first couple years out of college. I’d get texts at 9:00pm saying they’re headed in a bit to whatever bar but I’d be getting ready for bed by then. You just can’t do it if you want to be any sort of a functioning person the next day.

There are many days where I have 4:00pm meetings. Or 5:00pm meetings. Or later. And it’s awful staying that late but it’s part of the deal with getting in so early. I don’t bother people to come in from 7:00am-9:00am but I need to respect having to stay if there’s a meeting after my usual leave time.

I drink a fair amount of coffee. I don’t do Red Bull or 5 Hour Energies. I did a long time ago but man I don’t think that stuff is good for you. So I drink coffee. Generally 2-4 cups. Most days it’s not any less or any more than that even though I try to stick to just one cup on the weekends. It’s something that I’d like to cut back on but for now, I need it. Speaking of coffee I’m in desperate need of round two…

Side note: It’s helpful that my wife has an early shift too. She gets up when I’m headed out the door. I don’t think this would work though if she wanted to stay up until midnight because she didn’t wake up until 8:00am.

When do you get into the office?

What do you think about being the first one into the office? Do you see any benefits? Drawbacks? When do you arrive? Could you arrive earlier? Let me know in the comments!

Thank you as always for reading. Do me a favor and send this to a fellow creative professional if you think they could benefit from it.

One last thing! If you want new articles delivered to your inbox, you can sign up here.