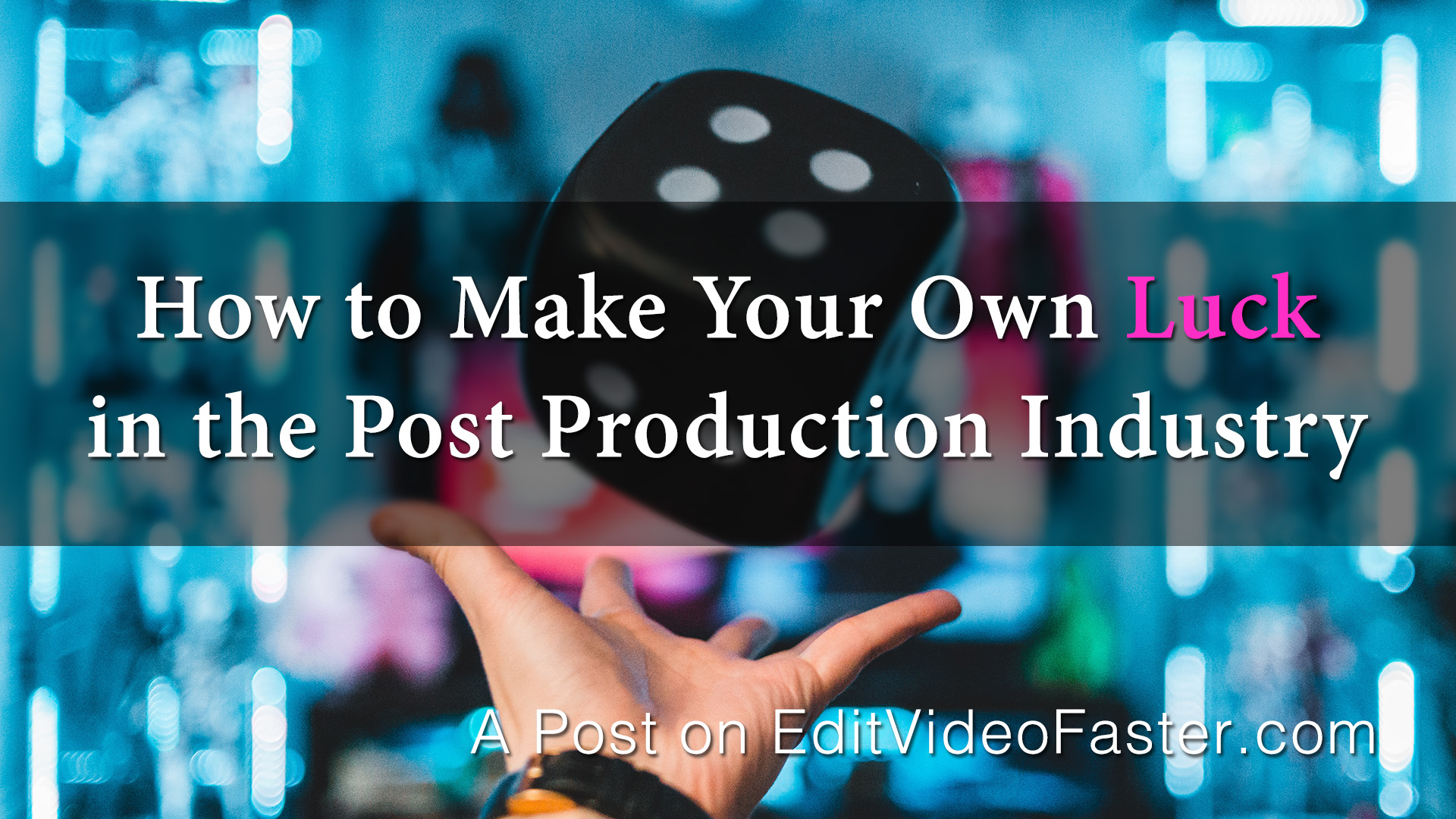 Working in Post isn’t for the faint of heart. It takes courage and perseverance. Stuck on what to do in a cut? Figure it out. Random NLE error? Hit the forums. Need a new video editing gig? Gooood luck.

Luck… Luck plays a role in every person’s career no matter the industry. Being a video editor is no different. The element of luck lands you video editing jobs, introduces you to the right people, gets the right people to see your work, and keeps you from getting hit by a bus any given day.

Too dark? My bad.

After a decade+ in video I recognize I’ve been lucky. However I also recognize that I’ve made a lot of my luck. In this brief article I want to share a couple ways that I believe luck can be made for those that want to be in video editing.

Put Yourself and Your Knowledge Out There

For me, I do that through EVF. Instead of “knowledge” a lot of people can substitute “work” but I can’t. I can’t showcase a lot of my finished products due to the fact that most legally can’t be shared. So I use this platform to display what I know.

I’m a fast video editor. That’s my key selling point. Speed with good media management sprinkled in. I’ve landed quite a number of gigs just by people trying to figure out how to do something, finding me, then hiring me to make their video for them.

How are you able to put yourself and your knowledge out there?

Have Hobbies Outside of Video Editing

Video editing can’t and shouldn’t be your only hobby. Honestly, it shouldn’t be a hobby at all. It’s your career. This means that you need other interests outside of cutting videos. The great thing about video editing is that virtually anything can have videos created around it. And usually you’ll get first dibs at any opportunity when there’s no other creative professionals around.

Let me conjure up a complete BS story that I could see actually happening.

Adult slow pitch softball. You read this article and realize you need a hobby so you join a team. The team ends up winning the championship. This guy Jim you kinda know who’s been on the team for ages broke his foot in the first game of the season. Jim ends up taking a ton of fantastic shots and footage throughout the year but doesn’t even know how to get the shots off the SD card.

You take the SD card and you being you spend a boozed up Friday night making a killer recap video of the season. The team gets together on Saturday for one last hangout before going your separate ways until next season. You play the video. Pam, the Left Fielder and marketing manager at some mid-sized company you’ve never heard of, didn’t know you were an editor. She sees your video and is blown away. Next thing you know Pam is asking if you can make a video (for money of course) for her company. Your video editing skills combined with a little luck landed you a new client.

Go do stuff outside of video editing and you never know when luck will strike.

Experiment with a Fan Edit

(It’s 11:00 PM on a Saturday while I write this and am realizing that didn’t make much sense but I’m on a roll and want to leave that in so let me try to explain)

Is there a (preferably local or relatively unknown) music artist or band that you are into? Grab a video of a live performance and make a music video. It can be one of those typography-only cuts with some cool textured backgrounds. IDK, get creative and have fun with it. Send it over to them. If they’re cool then they’ll give you credit/shoutouts on social. Alternatively you could request that too I guess.

I’m not saying to “work for exposure.” No, not at all. You have no idea what could result from creating a music video for Johnny Guitar. Maybe they’ll strike it big and want you to go on tour with them to make a documentary? Who knows. That’s the whole point of this luck thing. Create chances for people to be exposed to you and your work.

The Most Basic Luck Hack: Network

This is the most generic and boring answer to “how to make luck” but that’s because it’s true. Network your tail off. Even if you’re an introvert.

All the examples above are different variations of networking. Networking, above all else, is the best way to make video editing luck. It’s not as cool as jumping on a tour bus to film a documentary about an up-and-coming folk band but networking will lead to job after job after job.

I look back over the past 11ish years in video editing and find example after example of luck. My luck could have been completely different, for better or worse, had one thing happen one day because of one tiny decision. We don’t know what the future will hold. I mean just look at 2020 so far friends…

Even though we can’t predict anything we can still do things that give us more chances of good things happening to us rather than bad things. You have the chance to control your own luck if you’re willing to put in the work.

Note: Some links in this article are affiliate links. All that means is that if you were to purchase something from the site after clicking the link, like Amazon, I would get a small commission. It’s no extra cost to you and maybe one day from it I’ll be able to buy a 6-pack of Sierra Nevada Pale Ale or Peyton some pumpkin Fruitables.

Did you enjoy this article? If so, I’d love to keep in touch. All you have to do is go here to stay in the loop on new blog posts, tutorials, and announcements.