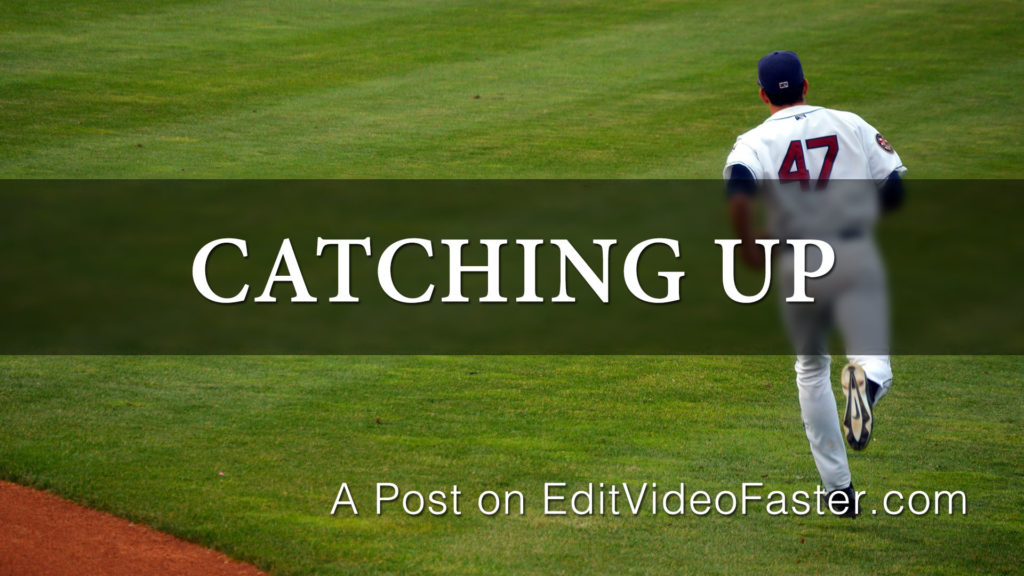 It’s been one of those weeks for me when it feels like the deck is stacked against you. Literally every move you make is countered with one that puts you an extra step backwards. Phew. Since this is the case I’d like to just write about what’s on my mind instead of getting into nitty gritty software details. This gives me a chance to let you into my life a bit and into some of the ideas and goals of Edit Video Faster. Is that cool?

This week I’ve dealt with a hectic shoot (understatement), a serious health issue with a parent, out of town travel for work, and the Internet and TV being down to name a couple things. I’m not looking for a pity party. I know you’ve probably dealt with and regularly deal with worse than this. I’m just giving you context because the last thing on my mind is recording a new tutorial or working on EVF’s upcoming Media Management Fundamentals in Avid Media Composer course.

I’m one of those people who likes to run a million miles an hour in 12 different directions. Last year I decided to try to lower the amount of directions. I got it down to maybe 7 by stopping to coach baseball (which I will do again one day), quitting side projects like a fantasy sports website I was doing with my best friend and almost completely stopping to blog about beer. This allotted more time to focus on the projects I wanted to be focusing on, Edit Video Faster being the main one. Well, somehow I’ve gotten back into old habits and now it feels like I’m running in 15 different directions.

It’s so darn difficult to say no to these endeavours. Each one feels like it’s important but I think in order to save my bleeding bloody I might need to sever a limb in order to save the rest of it. And hopefully that limb will grow back… (too graphic??). Oh, don’t worry. I’d be severing limbs in order to save EVF. I’m not going anywhere! More on this in a minute.

EVF has always been a experiment on if I can help fellow editors get better at their craft while supplementing my income doing it. Each month this site makes around $10-$15 total between Amazon, the Quick Transitions Bin and a couple other penny-making projects. It costs about $20 a month to host it and the shopping cart. I guess I’m failing at the latter objective. However the first goal, helping fellow editors, is going fantastic IMO. I got an email from Zach two weeks ago that I have starred in my inbox. Since then whenever I’m needing some encouragement to work on a tutorial or post or email newsletter at 10:30PM on a Thursday (like right now) I open it up and it gives me that little bit of motivation to keep going. Thank you, Zach.

As a kid my mom always thought I’d become a teacher. Like any stubborn boy I automatically rejected what my mom thought. I didn’t become a teacher in the traditional sense. But somehow between teaching Tae-Kwon-Do in my teens, coaching baseball in my 20s and now mentoring video editors in my late-20s…I gotta admit she might have been right.

Back to the I’m not going anywhere thing. Something I hate is investing time into something/someone and they disappear. This happens all the time on the Internet. I get hooked on a podcast and after 25 episodes they’re gone. I invest hours reading posts by a blogger then they trickle posts out once a quarter (that’s very hypocritical of me because of what I did with my beer blog, whoops). This stuff happens and I get it but it doesn’t make me hate it any less.

June will be two complete years working on EVF. In no way do I feel myself slowing down. In fact, I only see myself and EVF ramping up more and more! This is great news for you. While I used to post 2ish times a month, I’m now at a steady once a week mark. I will miss a week every once in awhile (this week it nearly happened) but for the most part I’m pretty spot on. What I’m getting at is that I’d like you to trust me when I say that Edit Video Faster is not going anywhere and I have plans to build this thing for years. You can invest your time in growing as an editor with me. As I learn and struggle and overcome I’ll pass that insight to you as often and as thorough as I can.

The last sip of my beer is gone. I’m wiped out and need to hit the sack. Thanks for letting me ramble on a bit this week instead of focusing our normal video editing topics. If you liked this kind of post and want me to do them more often let me know in the comments below. If you’re new around here I promise I’ll dive deep into video editing, software tricks and tips and tons of other goodies to make you a better editor very soon. I’d love for you to stick around for it and you can do that by going here.

I’ll see you on Sunday with a new Video Editor’s Digest!