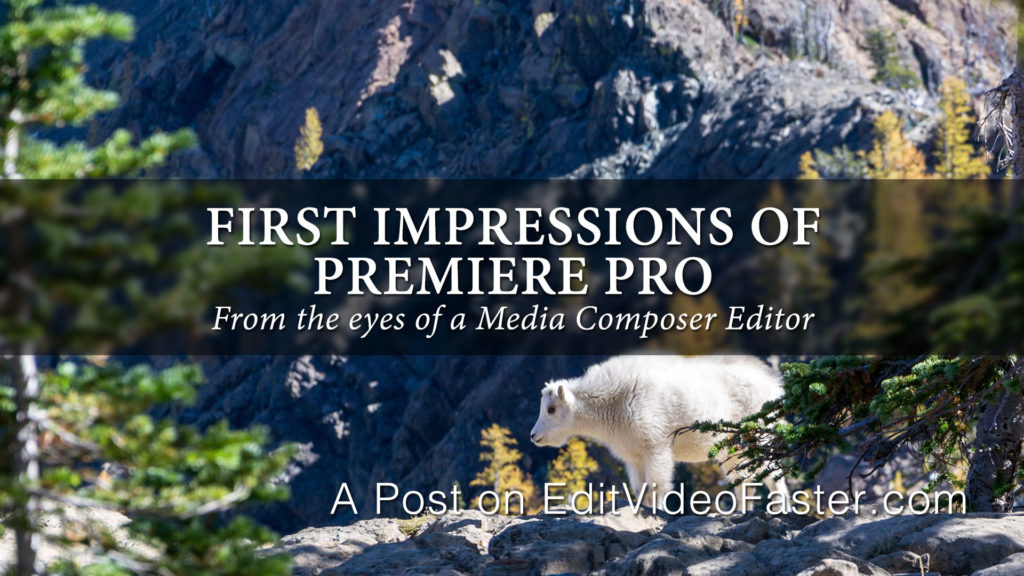 In this post I want to give you some of my first impressions of using Premiere Pro after the last two weeks of using it. I will compare many aspects to Media Composer so if you use either of the NLEs or if you use one and are curious about the other then there should be some goodies in here for you.

If you’ve spent anytime around EVF recently than you know I made the jump to freelance. What you might not know is that I have a recurring gig 3 days a week. At that gig I’m using Media Composer and Premiere. This is a huge deal because I’ve literally never even opened Premiere before.

This is this first time I’ve opened up Premiere. I’ve had zero training. I watched 15 minutes of introductory Lynda.com lessons but those were those basic overview lessons that had no substance to them.

I spent the first few minutes getting familiar with the layout. I use After Effects a ton so I’m used to Adobe and how Panels work. I set up my initial workspace and saved it. This worked the exact same as AE. I do like how Workspaces work with Adobe. I gotta hand it to them. There is a slight learning curve figuring out how to move Panels around but once you get it it’s very flexible and convenient. So, okay. +1 for Premiere I guess.

My first project was already setup for me. The sequences were already created and VO imported into the project. I had two footage Bins and some title templates in my Project Panel. From here I decided it was time to start cutting and see how it goes. It didn’t take long before something came up.

I found the VO and put it into the Sequence. From here I ran into my first issue… How do I do an Add Edit? I want to chop the ten minutes of audio up into pieces and move them around because when the recording was read there wasn’t enough of a pause between sentences.

I took to Twitter. I got an overwhelming response with the Razor Tool (C) and whatever the actual Add Edit feature in Premiere is called (Cmd/Ctrl+K). The Cmd/Ctrl+K shortcut was exactly what I was looking for. I realized later on though it doesn’t look like I can make an Add Edit to a blank area of the timeline. Maybe you can but I haven’t figured it out yet. I do this a ton in Media Composer. If I have audio and know exactly how long I want a shot or series of shots to last then I’ll put Add Edits onto the video track(s) just as a placeholder. So then I can come back and hit T in MC or X in AE and quickly edit in the shot from the Source Monitor.

Premiere Pro Shortcuts and Such

I had a choice to make – do I learn the Premiere shortcuts or change them to Media Composer’s? I choose to take the difficult route and learn Premiere’s default shortcuts. Why? In the long run it will be better to know the software in full, like I do for MC. Even if I don’t or won’t like it as much, I want to learn Premiere like I did for Media Composer – 100%, no bad habits, used as the designers designed it to be used.

When I’m editing I keep my right hand on the keyboard at all times and my left hand shifts from the keyboard to the mouse/trackpad as needed. I’m a lefty. This means that I use my right hand probably 2x more on the keyboard. I tend to have my right hand reach over to the left side of the keyboard if I’m doing repetitive mouse clicking tasks. But for marking In and Outs in MC or Premiere it’s easy… I and O. For righties though, this would drive me nuts if I was a Premiere editor!

In Premiere you use period and comma to overwrite and insert edit clips. This is different but not foreign. It’s the same as using B and V in MC. I’ve found that switching back and forth between MC and Premiere that I keep hitting period on accident in MC which will slip a clip and if you’re not paying attention you can slowly start knocking clips out of sync or move them by a frame which could make a big difference…

The three point editing hierarchy in MC so much better. I don’t like how in Premiere I have to choose to ignore the source or the sequence in or out point when I have all four points created. In MC there’s a hierarchy that decides which in/out points to use automatically. BTW, anyone know how to clear and in or out point in Premiere? I know it’s a Google search away but haven’t done it yet.

In order to organize my first impressions of Premiere Pro I jotted down a bunch of notes over the past two weeks. I want to run through them rapid fire-style.

The next two paragraphs are completely personal opinions about Premiere and Media Composer. Again, these are based on my first impressions of Premiere Pro faster only two weeks using the software. Take them for what they are – an opinion based on one’s experience.

I love Media Composer. Two weeks in Premiere makes me love MC even more. But Premiere isn’t so terrible. Most of my issues are just because I don’t know how to do things. This is my fault; not Premiere’s. I’m sure my personal opinions will change. I get upset when I know what I want to do but I can’t. So I blame the NLE, not it’s operator.

I love the rigidity of MC – I’ve build two different media departments around it. Premiere seems fluid…which is good and bad. Depends on how you look at it. My first impressions of Premiere Pro have me feeling that it seems to be “up with the times” while Media Composer is still old school. Maybe is it time for me to be “hip”?

I hope you enjoyed this look at my first impressions of Premiere Pro. If you’re new around here I’d love for you to go here and sign up to receive email updates about new posts and get the Video Editor’s Digest – a weekly newsletter with tips, tricks, resources, links, opinions and more about becoming the best editor you can be.

If you have any thoughts on making the jump to Premiere or any of the features I talked about above, I’d love to hear them in the comments!