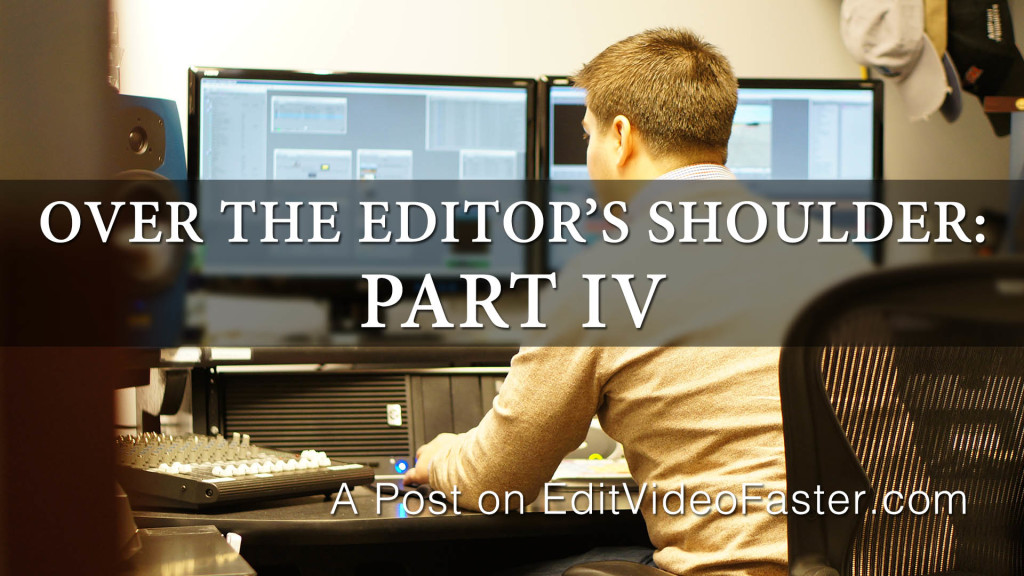 This is Part IV and the final chapter in a series called Over the Editor’s Shoulder where I document my daily progress on a freelance editing project I’m working on. I chronicle what I do in the edit bay, what I learn, my struggles, failures, successes and more.

You probably noticed I didn’t post last week. I was on vacation and with everything going on recently (this freelance project, regular work, packing, Command+Edit, etc.) I wasn’t able to get my act together to write a post worthy of your time up. My bad. But I’m back and hopefully I can piece together the final days of this project because I’m certain I killed more than a few brain cells drinking beers and playing chess by the fire last week.

We left off two Thursdays ago with me scrambling to get a first final cut over to the client.

That afternoon I got back some small changes. I just had to adjust the titling on some lower thirds. No big deal. Here’s my simplified workflow for updating PSD Sequences (this is what I used for the lower thirds to export them out of After Effects and import into Media Composer):

That evening I got my client’s client’s feedback back (is anything in that sentence grammatically correct?). At this point in the edit the music is synced up to my cuts and I hate adding or subtracting time to the video. It’s soo much work to retime everything out. In all likelihood it’s going to look worse adding something in because all the other edit points won’t be darn near close to perfect with the music like they were before.

I got a request to 1) replace a sentence and 2) remove a different sentence because it was repetitive. I was horrified since I was trying to have everything wrapped by Saturday morning so I can put my brain on vacation mode before I leave on Sunday.

Some other comments were to apply this color and time stylization I did to a few shots to some other ones, raise the music here and there, change the color on a logo, … those kind of small things. Since I’ve been in this project so much recently I know exactly where everything is and how to re-create the coloring/time stylization thing. A month from now it would have taken me probably 5 hours instead of the 3 hours it took me that night.

Around 11:00PM I was done (!!) or so I thought. I hit export and encoded an .mp4. I was all ready to publish it to ScreenLight but, as always, I gave it once last lookover before sending it off. Then I saw it. On the very last screen. I forgot to change the color of the logo. Rah! I even re-exported a new PSD from After Effects. I just didn’t change the color on it! I said screw it and sent myself an email to remind myself to do it in the morning.

This is it! We’re almost done! I fixed the logo, re-exported and encoded a file, QC’ed it and uploaded it to my client. I requested he get me any feedback early in the day so I could finish it up that evening if needed. I’m leaving for vacation Sunday morning and I really don’t want to take my drive so this is kinda important.

1:48PM I get an email saying everything is great and to not worry about anything until I’m back! Woot! Vacatioooooon!

::Cut to Josh having fun on vacation::

Taking A Step Back and Looking Around

This project took just under 3 weeks to complete. That’s pretty standard in the scheme of things but for me it was a relatively tight turnaround being a “nights and weekends” project. It took roughly 50 hours (+/- 5 hours). In hindsight I should have tracked my hours more closely but through this exercise I was able to approximate it accurately enough for my taste. Trying to squeeze in an extra couple of hours of work each day is rough. It was doable and I made it work but man, my caffeine consumption was stretched to the max.

The most difficult part was that I had to be creative late at night. My brain turns off around 7:00PM each night and my creativity is near nonexistent. I’ve been working on that recently since Nick and I record Command+Edit after 9:00PM each week. I made it work though. I tried to crank out as much as I could on weekend mornings or right when I got home from work. I’m still kinda in “work mode” and after walking Peyton when I get home I would go straight to working on this project.

This project pushed me out of my editing comfort zone. I had to figure out how to do a few new things (like the slow-mo I talked about in Part III) and got to be more creative than usual since the normal training/gov’t videos I edit stifle my creativity a lot of the time.

I have a couple more videos similar to this to edit in the series for my client. I don’t think I’ll document my journey through them since they will be similar. If you liked Over the Editor’s Shoulder though, let me know! I’ll do more in the future as long as they’re wanted.

I have a lot of new non-editing projects coming up so I’ll be busy with those between the videos for this client. I really want to get another Media Composer product made before the end of the month – something similar to my Quick Transitions Bin. There are new Command+Edit episodes coming out each Monday (oh yeah – that’s my new podcast if you haven’t checked it out yet!!). Saturday I should have out a new Media Composer tutorial as well so look out for that!

Make sure you’ve subscribed to get emails about new posts – just punch your email address in the box in the top-right corner. Come say hi to me on Twitter too!

Thank you as always for reading! I look forward to seeing any comments you have on Over the Editor’s Shoulder, Command+Edit, editing, life, anything. Cheers!

1 thought on “Over the Editor’s Shoulder: Part IV”