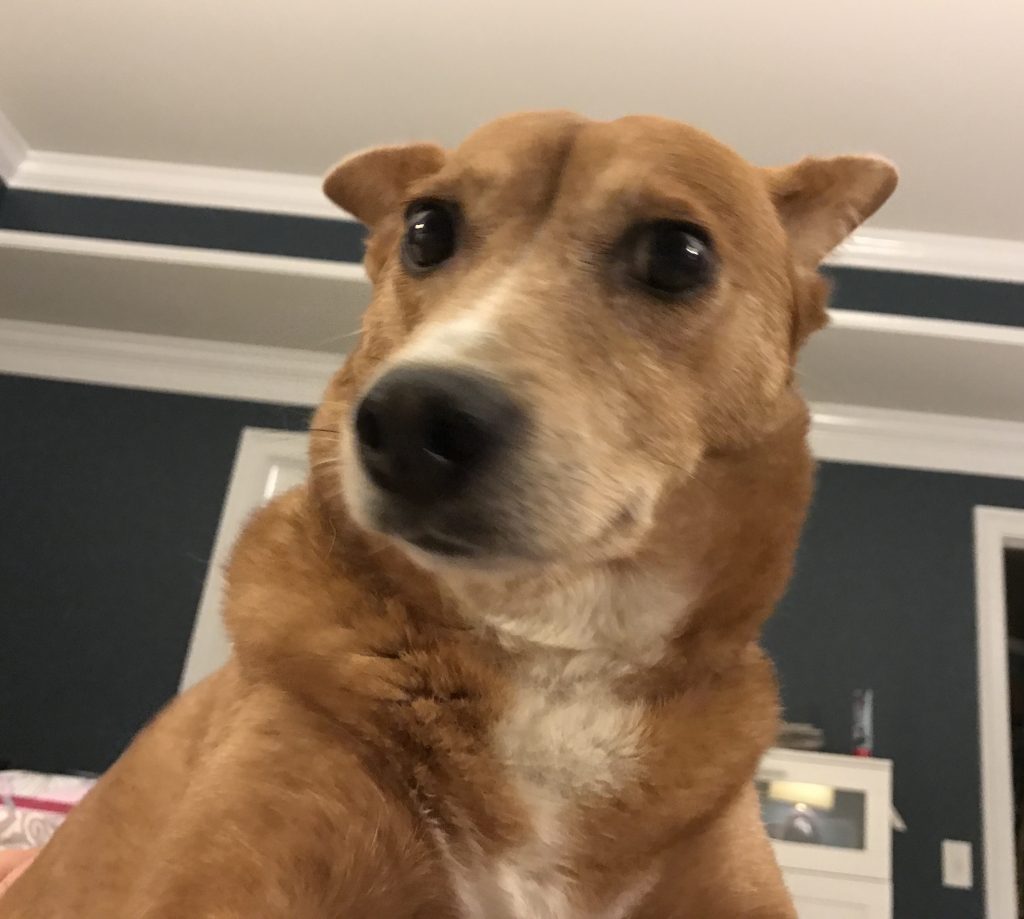 I took this picture of my dog the other day. It appears though that she stole my phone and took a selfie. I swear the world would be a better place if dogs could use phones and we could text our dogs while we were out of the home.

It was the last day in month of May in the year two thousand and seventeen. Alone in a cold edit bay on a warm sunny afternoon an editor watches a blue bar slowly move from left to right inside of a gray box. 47 minutes remaining. He thinks to himself, “I’ve been wanting to write on my business’ blog for weeks but haven’t found the time or self-awareness to actually do it. Maybe now’s a good time to try.”

And here we are. If I haven’t lost you yet I’d like to take the next thousand or so words to talk about what’s been going on with EVF, the podcast and my freelance editing work.

The online comedy show I’ve been working on for the past several months recently launched! The only editing left to do is a small change in one of the later episodes and the creation of some more marketing material for them. This project is so. darn. close. to being done.

Let’s have some #realtalk for a moment. I’ve been so close to this project that I find it really difficult to share it with the world. All I see is imperfections, shots I wanted reshot and lines of dialogue I want changed. But deep down I know it’s pretty darn good and about as good as I was ever going to get it based on the constraints I was working under. Warning: the comedy show is definitely PG13. Here’s their website where you can watch the first two episodes. (yes, I’m still terrified to share my work. I believe most editors get the same way too)

Here’s some more #realtalk. I screwed up my 2016 taxes. I thought I had nailed it back on April 15th. However I met with an accountant to talk about 2017 and while going through 2016 he found two fairly significant screw-ups. And they’re probably going to cost me a couple thousand dollars. Whoops. But we’re sorting it out and it’s better to get it done right than risk getting dinged later down the road. Needless-to-say I’m disappointed. It’s a learning experience that I’ll grow from though.

I was meeting with the accountant because I’m getting an LLC for my freelance business (which EVF will eventually reside under) and I wanted to see how my accounting would work with my new business. That’s when we discovered my mistakes in 2016. Anyway, back to the LLC. Getting an LLC is something I’ve been putting off. Why? It’s completely foreign to me. I hate things like legal paperwork (but who doesn’t?). As my freelance business matures I need to protect myself, “legitimize” myself and set it up in a way it can continue to grow. BTW, if you’re interested in the process for setting up an LLC let me know as I’m considering writing about my experience with it.

We currently have two interviews booked for June. One is with an editing educator about their time teaching editing overseas and the other is with a screenwriter.

In Command+Edit Episode 73 (above) I chatted with Avid about their upcoming Media Composer | First release. MC | First is basically a free, lite version of Media Composer. It sounds perfect for anyone interested in learning Media Composer but might not be ready to pull the trigger on a year-long subscription without first getting to know Media Composer a bit better (because let’s face it, Media Composer is a tough software to learn). I’m [highly] considering taking a dive deep into MC | First and creating some training material around it. However it depends on if there’s enough demand. If you’re remotely interested in MC | First and using resources (guides, courses, tutorials, blog posts, etc.) that I create to help you learn it, I’d really like to hear from you. All you have to do is reply to this email.

Here on the EVF website you may have noticed I switched themes! However in the process I accidentally deleted my homepage. Oops. I don’t mind because I wanted to overhaul it anyway. I’ll be doing some other minor updates around the site while I continue the painful process of switching hosting companies as well. All I want to do is create videos and write helpful things on the internet and it feels like there’s always a thousand other obstacles standing in the way!

Anyway, thank you so, so much for reading. Please give me a shout if there’s anything you’re struggling with and you think I could help or if you just want to chat post or baseball or dogs or travel or anything. 🙂